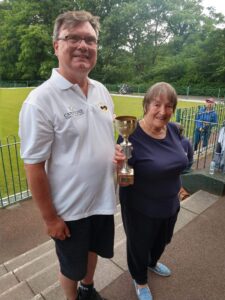 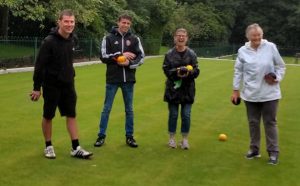 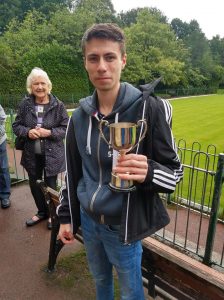 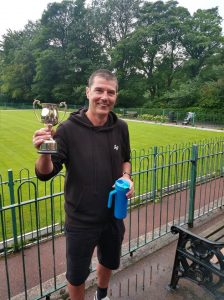 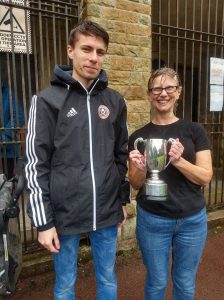 This years Manor Park competitions include:-

The club away day took place on Sunday 23rd June at Barnton Bowling and Cricket, club near Northwich.

The round robin competition was won be Dave Thomas and Luke Jones, who narrowly defeated John Ingerson and Hazel Perkins.

Well done to all 4 finalists for such an entertaining game. 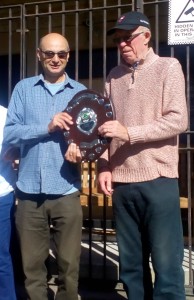 Congratulations to Luke Jones who retained the Harold Ingerson Trophy after beating Anne Donoghue in the final on 2nd September. 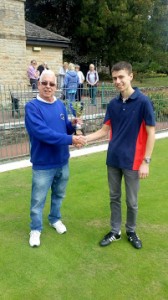 Congratulations to Martin Coombes and Trevor Whiteley who won the round robin competition at the club away day in Southport on 24th June.  Martin and Trevor defeated Luke Jones and Jim Capstick in the final. 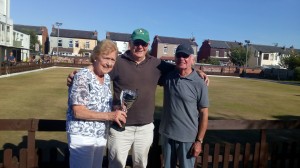 Barbara Taylor presenting the cup to Martin and Trevor

The club have organised two competitions for members.

Harold Ingerson Trophy.
The cup is a knockout competition. Each player will be paired up with an opponent and each pair must play their game within the specified time limit.

Joe Bassett Trophy. (Doubles)
The cup is a knockout competition. Players are doubled up with a partner and each doubles pair must play their game within the specified time limit.

If you are interested in taking part, please enter your details by no later than 30th April 2018 on the entry sheets in the clubhouse.

Click here for full details of the above competitions.