June winner, Peter McMahon, with a total of 50 points.

The highest total monthly scores will be the winner of the Jim Capstick Cup presented at the end of the season. 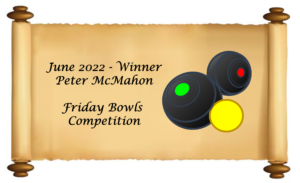 Next week’s activity at Manor Park.  Come Along and learn to play bowls and/or watch a league match. 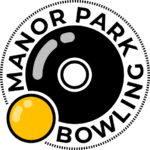 Neal Linsky’s team won the June club pairs cup this week. Here are the details of the winning team and the runners up. 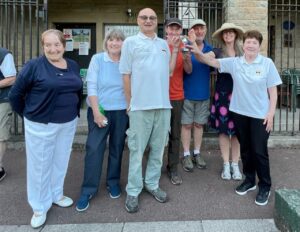 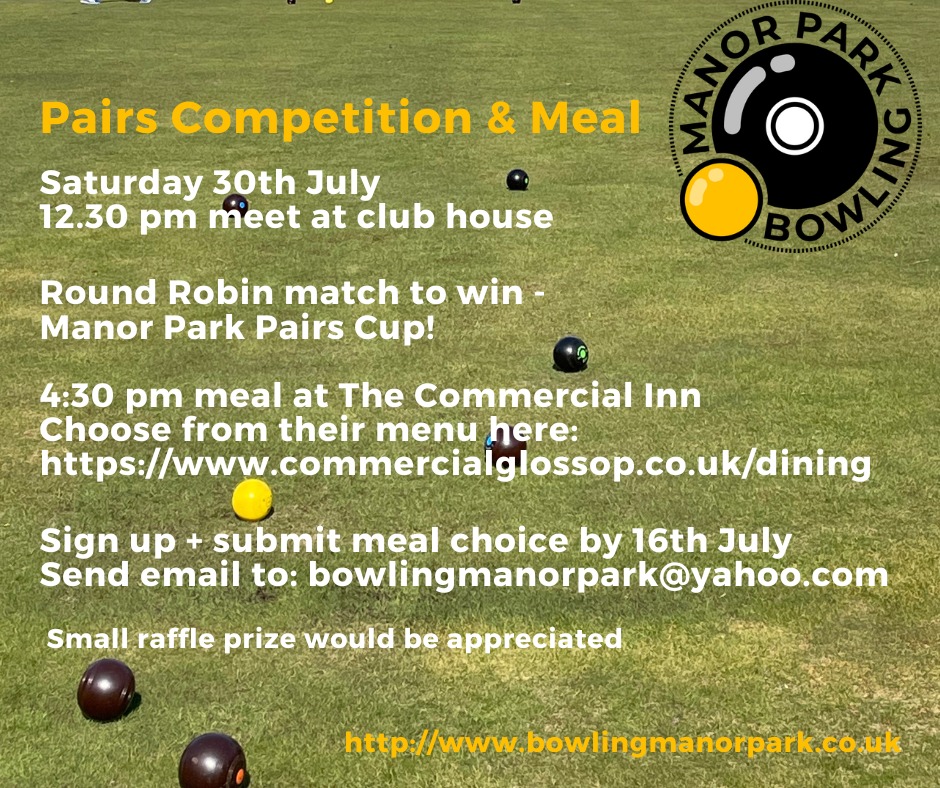 On Saturday 30th July the club will hold a pairs competition at Manor Park, meeting up from 12:30 pm. There’s a cup for the winning pair. We will then have a meal together at The Commercial Inn afterwards. This is a club “away day” without having to go away.

if you want to take part in the competition and the meal, please email bowlingmanorpark@yahoo.com

It should be a great day. We hope you’ll join this event and we’ll all have a great time. 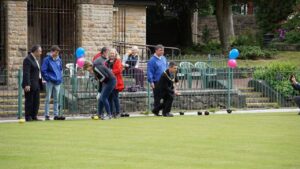 Manor Park Bowling Club is offering free membership until the end of the season in September 2022. If you have played bowls before or new to bowls we can offer new members social bowling sessions on Tuesday and Sundays 10am until 11.30am. You will get a friendly welcome. We provide free coaching and use of club bowls. Members who want to join a team can get match practice on a Friday evening from 6.30pm.

We are hoping to run a number of new teams next season. So if you have already played bowls before or want to learn you can put your name down for one of our new teams.

Councillor Ollie Cross, who is the Mayor of High Peak Council, visited our bowling green earlier today as part of our Big Bowls Weekend event.

The mayor said  this after taking part in the event:

“I had a wonderful morning at the Manor Park Bowling Sunday Social. The Club took part in the Bowls’ Big Weekend 2022. It’s a national event run by Bowls England and the British Crown Green Bowling Association that encourages folk of ages and backgrounds to give bowls a go.

I’m very much a work in progress, but I had a smashing time and it was a pleasure to have a good quality chat with members of the club over the course of the morning. It’s more challenging than it looks and consistency isn’t easy to achieve. However, I had a lots of fun and thoroughly enjoyed myself. Thank you to all the members for such a warm and friendly welcome.

Manor Park Bowling Club are friendly, welcoming and accessible club that is open all ages. They run free taster sessions every Tuesday and Sunday morning between 10am-11:30am. You don’t have to be a member to join in and all equipment is provided. Manor Park also provides a very beautiful setting too.” 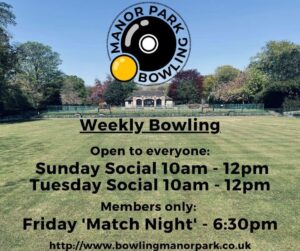 This Friday, 27th May we are starting our first Friday Match Night at 6.30pm which is open to all members.

This event is new to our calendar and is an attempt to fill the gap between Social Sunday/Tuesday events and League Matches. Our League teams are now all up and running with successful wins for all teams. Our Socials are also proving successful and cater for those new to bowls and those who want to play in fun competitions without the pressure of match play. There has now appeared a gap between these two options for those who want to play full matches as in the League games but are not yet ready for the challenges of League matches, hence the trialling of the Friday Match Night.
The initial plan for Friday night is for members to play a singles match using the same format as for League matches. This will be over four weeks and the highest total individual score over the period will win the monthly cup. There is no need to commit to playing every week as for our Leagues, just turn up and play on any Friday.
If this is successful those playing will give the club a pool of match ready players who could be ready to join the League teams next season.  If this pool is large enough we could  look at forming an A and B teams for some of our Leagues. This could resolve the issue of no team places available for everyone wanting to join League teams.
The Mayor will be attending on Sunday 29th May so it  would be great to see as many of you as possible at both events.

Manor Park Bowling Club is taking part in the Bowls’ Big Weekend 2022, on Sunday 29th May from 10 am onwards. This is a national event run by Bowls England and the British Crown Green Bowling Association (BCGBA).

“Providing the opportunity for you, your friends and family to give bowls a go”

Please help us support this memorable event by coming along and trying your hand at bowls, or cheering from the benches. We are a friendly, welcoming club and this
is set to be a fun day for everyone. More info is available here: Bowls Big Weekend 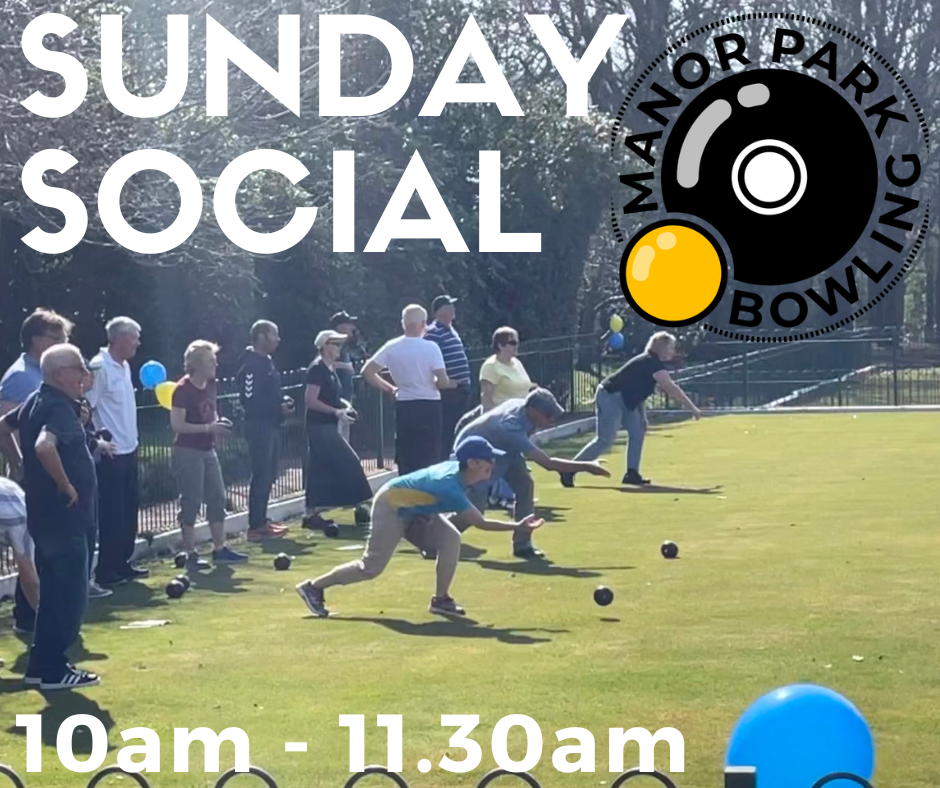 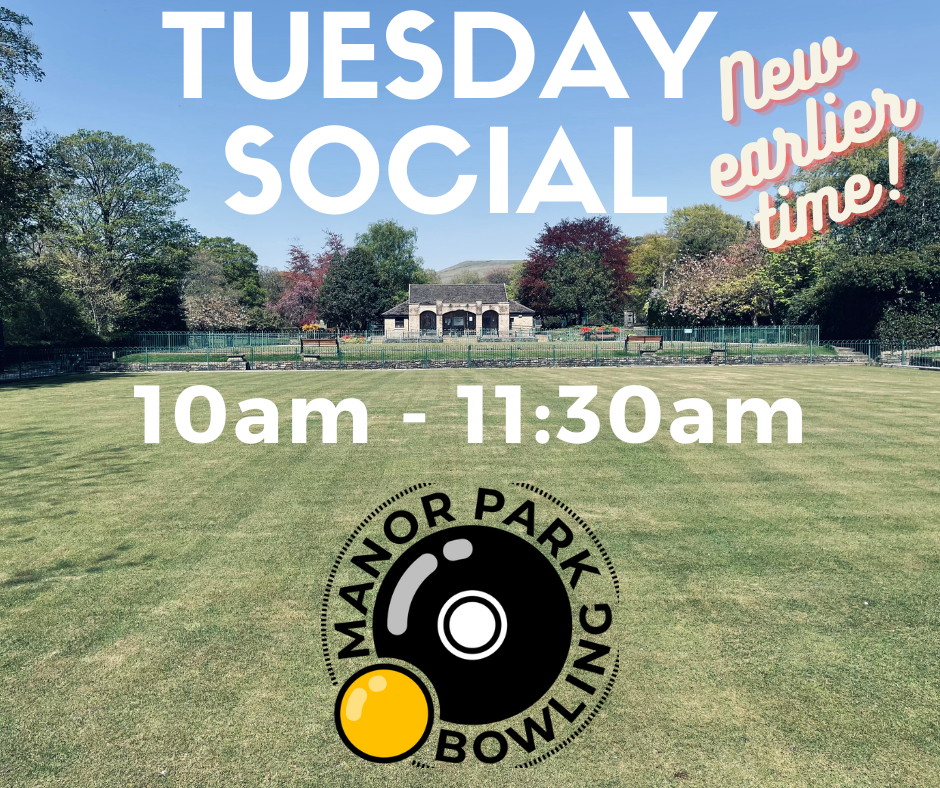 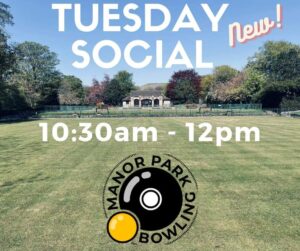 We now have a NEW Tuesday Social 10.30-12, everyone welcome. Come along and play if you fancy a bowl. Annual membership as a social bowler for Manor Park Bowling is still just £12 per year! And we have an offer of free membership for new social bowlers again this year. Come along and have a go, it’s a very pleasant way to spend some time, socialising and bowling.